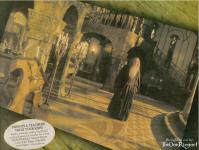 One of the many Toronto Star ads for the Casa Loma exhibit contained a gorgeous new photo of Gandalf in Rivendell- it really shows the depth of detail used in the sets! Also, the Star article you already posted was accompanied by two pictures in the print version, so I thought I’d send them to you.