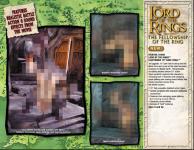 Ringer Spy Noah sends along this secret pic he managed to get out of the endless terrain of the internet. Sadly mind you, the image has been blurred…just for this very reason…sigh..