t may be hard to believe, but the head of Special Effects for the mammoth Lord of the Rings trilogy of films has quite a few problems with the average telephone. ‘American phones, I’ll never get the hang of them, it took me forever to call you!’ he openly admits to me during our conversation on a cold October morning.

Taylor, currently visiting LA for a few weeks, happily exclaims that talking to a Canadian may be the highlight of his day. ‘I’ve spent weeks with Americans, it’s nice to talk to a Canadian for a change!’

It is surprising that one could get Taylor, the head of WETA, the special effects company owned by Peter Jackson, excited about a phone call. You’d think that being in charge of the most anticipated film of the year would be enough to make you lose sleep at night.

Taylor takes it all in stride, ‘We’ve had the most wondrous adventure down in New Zealand’, referring to his team of over 45 crewmembers who have been with the project since day one, ‘it has been amazing, we cannot wait for the true fans to see it’.

Taylor, a native New Zealander and close associate with director Peter Jackson has had many an adventure. His collaboration with Jackson began on the set of the 1989 cult hit ‘Meet The Feebles’, in which Jackson directed and Taylor held the role of chief model maker, they later went on to work together on Jackson’s other films ‘Braindead’, ‘Heavenly Creatures’, and ‘The Frighteners’. ‘Peter has such an incredible imagination and such a childlike quality about him, we are great friends and business partners’ Taylor says.

WETA workshop is housed in an unassuming collection of warehouses and factories along a suburban street in Wellington, New Zealand. The most unlikely place you would expect computer-enhanced magic to turn blue screen sets into the dark mines of Moria or the magical forest city of Lothlorien, ‘the whole thing has been such a journey for all of us, and we just love hearing about the fans reactions when they see some of the work we’ve been doing!’

Some of that work comes in the form of fine collectable pieces made by Sideshowtoy thousands of miles away in Los Angeles. ‘The folks at Sideshow are incredible, so accommodating’, so much so in fact, that when Taylor returned from the Cannes film festival with an idea in his mind, the Sideshow suits approved it without even knowing the details. ‘It was great, they let me get on with the creative process without even questioning me’.

The idea: Bronze-like circular medallions that depict various scenes from the first installment of Lord of the Rings, The Fellowship of the Ring.

‘I’m an extremely big fan of the medallion work from The Royal Academy of the Arts in Britain,’ Taylor says, enthusiastically chewing over his childhood as he recalls collecting the intricate displays and detailed pieces of work to me, ‘I really thought we could do something like that for this film, and when I went to Cannes and saw these incredible religious icons imbedded in the walls at the Castle we were staying at, I knew that when I went back to New Zealand I’d work on that right away’.

The process of getting these pieces made is an interesting one. Taylor does not assign various teams to work on the project of his choosing. The WETA crew mull over each piece and chose the right person for the job, to ensure the quality and attention to detail of each piece.

‘The strength of any commercial artwork is the art direction. It is the subtle control of the art of the piece, the truth of it is, what we are making is a commercial product for a collector’s market. But under no circumstances do we take that as the primary consideration in our workshop. We believe in ourselves that we are making fine art, it happens to be fine art that we can produce in numbers, and sell on the marketplace, but each piece is cautiously and carefully art directed at a level that will generate fine art.’

Once chosen, the crew would then design a few rough sketches to be voted on by the collective, a process that not only involves giving their thumbs up or down, but they are also asked to give a reason behind their vote.

‘We have a system in our facility, where every person who does a piece of artwork has to put it up for voting, we have voting sheets. If your piece gets a score of eight out of 10 or higher the piece is good enough to go through for molding, but if it gets a score below eight, it means that the technician doesn’t consider that it’s quite ‘there’ yet, and if you give a mark below eight you have to write a comment suggesting why you don’t consider it as quite ‘there’’,

‘In doing this you can incorporate 45 peoples input, and in the process you can build a better final result because the group is having the opportunity to give input rather than just the individual. It very much 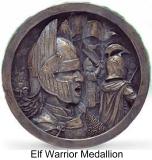 celebrates the attitude of collectivism and working as a whole until the final end’.

To add the look of ‘age’ to the medallions they are placed in a mold and sandblasted.

‘Making it look like they could be something found chipped inside a wall at an archeological dig when you found Minas Tirith,’ Taylor says excitedly ‘maybe they would have been inset in the tile work in the bathhouse where possibly Boromir as a child would have played, that is the sort of feeling we wanted. It’s imperative that there is a feeling of antiquity to them, that these could be relics from a lost era, it was that aesthetic that we pursued.’

Sold on the WETA/Sideshow website, the medallions are decidedly less expensive than the rest of the items sold online. ‘I thought we would generate a product that would be appealing to a market that we wouldn’t touch with our figurative work,’ explains Taylor ‘the homeowner that didn’t have shelf space for a very specific sort of cult-ish product, but would be interested in hanging moments from the film on their walls or sitting on their mantelpieces a series of beautiful, low relief figurative art’.

And many will agree with him, these medallions, depicting scenes with fearsome Orcs and Dark Riders, Elf warriors and amazing battles, will quickly become the most cherished possession of even the casual movie art collector.

Taylor goes on to describe the stages of creating them, ‘I initially started with the concept that they would be sandstone, or a stone look but, what became apparent as I experimented more with that, was that the solidity and permanence of bronze gave them a higher perception of fine art. Once again I asked the collective what they thought of the idea of bronze, they seemed to agree’.

Indeed the feeling of collectivism is seen throughout the entire filmmaking process. While certain pieces need to be overseen by Taylor and Jackson, Taylor allows his team to decide what to work on and eventually see through it to the final process, getting it before the camera. 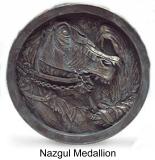 ‘We try very hard to ensure that everything you will see in front of the camera is as ‘real’ as possible. This is why we allow teams to work on certain things for weeks and even months, they will not allow anything to be shown outside the workshop unless they feel it is absolutely perfect’.

With this in mind it truly leaves one eager to see the collective final products on screen, to see the magic woven before our eyes.

‘I hope that everyone comes away from this movie with the basic story that Tolkien wrote so brilliantly, with it’s simplistic complexity that he weaved so well in which we hope to emulate’. 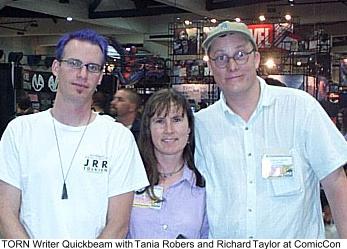