Barliman’s head honcho Jincey spotted something rather ODD in the Moria Gate picture from Elostirion: TENNIS SHOES?!? Now, either Frodo is a big fan of Nike, or something else is afoot (pun intended). 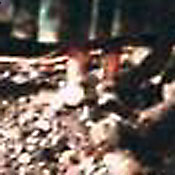 Possible explanations?
1. This is a photograph of a quick run-through before the scene is shot.
2. A bunch of rocks or roots that just look like shoes.
3. This is a fake picture (very well done)
4. Nike paid 30 million for an endorsment.

Our investigators will be pounding the pavement to get to the bottom of this mystery.

Paul sends in the following comments:

“About the Tennis Shoes. Well look carefully and do you see anything else interesting? Where are Boromir and Aragorn? As well as Sam and Bill the Pony for that matter? Given that most of the good shots on Elostirion do in fact look motionless, that is a deliberate still. I think we can conclude this is just another publicity shot and or rehearsal that was photographed. There is a chance this was a framing test but unlikely! You may also notice the lighting is in fact natural. As in the temperature of the light is indeed sunlight. Most big budget movies that use sunlight use filters and other lights to decrease the effectiveness of the Suns own light colour temperature. If this was really a shot taken from film it would look a little different. “

Greenleaf, from Elostirion.com, sends in more information about the picture:

“I hope you find out what lies behind the tennis shoe mystery. Those are definitely tennis shoes. I for one focus on the absence of Aragorn, Pippin and Gimli.

You can tell that the lighting wasn’t set up for shooting because there are two black bars of shadow on the right part of the door, probably filming equipment.

I don’t know if you’re on to this, but these tennis shoes might be a simple device to drag Frodo (or some kind of dummy – that would explain the legs) into the water, using some rig provided by the thing that is crawling out of the waters right up to Frod’s tennis shoes.

Harry of AICN described a similar scene, but that time three hobbits were standing behind Frodo, the shot bagan with the real Elijah Wood lying down and being dragged at formiadable speed into the murky pool. http://www.aintitcool.com/display.cgi?id=7722.”

“I have noticed some discontinuities in the picture. First, though, Greenleaf states that he focused on the fact of several individuals being missing from the frame, one being Gimli. Gimli is in frame, with his back to us (braided hair and helm). An explanation as to why Sam, Aragorn, and Boromir are out of frame may be found in the book, where, Gandalf task Sam and others to unload Bill the pony PRIOR to his opening the gates, to prepare for the journey through Moria.

The things that I noticed (Some of which may be addressed by Lighting / CGI in the actual film):
1. A visible seam line in the gate is noticeable., The book specifically states that no crack or joint could be seen in the face of the stone with the gates closed.
2. The encounter at the gate takes place at or shortly AFTER sunset, as moonlight is necessary to see the mithril engravings in the door (the book makes mention of the sunset as they begin the journey around the lake, and the moon being out and illuminating the engravings on the door). 3. The engravings in this picture appear golden – this is most definitely different from the book, which states specifically a silver color. “

BTW, thanks to everyone for providing some quality speculation! 🙂