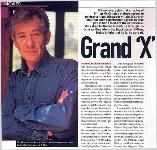 From January’s DIRECTV television guide. A short article on Ian McKellen (Gandalf), mostly X-Men stuff with a blurb on Ian Holm (Bilbo) and Lord of the Rings.