A Weekend in Middle-earth

From: An unkown spy 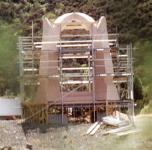 Well I had a day to myself on Saturday, and a car to myself, so I took my trusty Pentax P-50 on a tour of Wellington to see what I could see.

First stop of course was Haywards Hill to see how the set was progressing there. A few workmen were being kept busy but I’d say there’s still another week or two before this set becomes live. Which doesn’t leave them much time to film, I guess!

Then I took a trip out to Paekak to see the action out there. Lots of rehearsing, but all the extras were in civvies and seem to be milling around on horses. Here’s a view of the oliphaunt/nazgul from behind.

Not wanting to get prosecuted for trespass, I didn’t get any closer, so I left it at that. There was a patch of ‘burnt-looking’ grass by the feet of the model, as evidenced in the previous photo on TORN. However, there didn’t seem to be much else in the way of set that I could say. Maybe something’s coming in later?