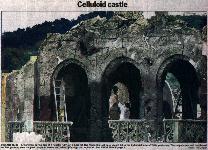 This is a photo from the front page of last night’s Evening Post. These ‘ruins’ are causing quite a bit of discussion. Since this photo was taken, the rest of arches and wall visible have been painted black. Could this be part of Minas Tirith, destroyed by fire? Or is it Minas Morgul? The rest of the set is made to look like old crumbling masonry. To the right of the arches in the photo are a couple of very large archways, one of which is in ruins. There is also a large set of steps about 8 metres wide, by 3 metres high. A tunnel runs under the steps. Behind the arches in the photo is a large domed stucture. In front of the large arches is a wall with arches similar to the ones in the photo. It appears that they are building streets within the set, so i would guess that if they are going to this much detail, this set will be used for some major scenes.

All about the set are parts of walls, arches, pillars, steps etc. Most of these appear to be recycled bits from other sets. There are a few holes in the ground about the set, and these are very curious. I wonder what they are for? By the looks of things, this set will be huge when it is finished. There is a huge blue screen behind the arches, and it is being extended to curve around the side of the set.