All in good fun of course, the latest issue of ‘Metro’ features an article on Craig Parker (Haldir).

“Craig Parker (Haldir) gets the spotlight on him in this month’s issue of Metro, one of Auckland’s leading glossy mags for people with spare brain cells. Great pictures of the ex-Shortland St. actor who’s headed for world fame with the role of Haldir in ‘The Lord of the Rings.’ We’ve heard rumours that the role is expanded a bit from what Tolkien wrote.

Metro’s article only mentions LOTR in passing, but gives us an idea of the range of Parker’s talent. As well as working in LOTR, he’s doing a part in a splatter movie called ‘No One Can Hear You’ and he’s appearing in a stage play about Oscar Wilde’s later years called ‘The Judas Kiss.’ His comment on the acting life:

“Drinking coffee is kinda my major hobby….the great benefit of being an actor is you have all this spare time. My ideal is just hanging out with people – I think I’m innately lazy” 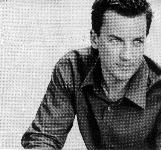