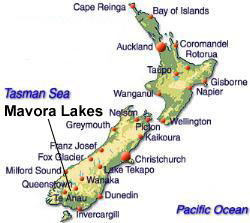 Hi just writing to tell you that I stumbled across a LOTR site yesterday the 12-09-00. Its at mavora lakes 45k nw of mossburn southland, I was tipped off about it by a guy and his wife going to the lake to fish when they came across it. When I finally got there (what a mission) I could not believe the magnitude of it, it was huge. I saw the security guard on his post when i got there but i just drove on by as if i never saw him. I continued on until I came right up to the set, i came face to face with a land buggy which was towing a trailer with some what looked like extras with costumes on, they were so close. I was trying to get past as if i were there to do some fishing on the lake but was stopped by a security guard who told me i could not get through. There was misty smoke every where to the point where i could not see, so i reversed up and left the area, but as i was leaving i noticed another little road going down to the lake front where the guard could not see me. So I went down there and sneaked a few shots of them filming a boat scene on the lake.