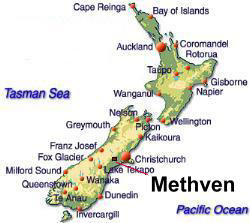 Ringer Spy Jedi stumbled upon the set near the ski hills on the South Island.

I was recently on a snowboarding trip in the South Island and went to a small private field called Mt Potts (an excellent field BTW!) Close to the road on our way up to the field was a set for LOTR, I didn’t know about this before going there so was understandably rather excited. The bad news is I was snowboarding and not touristing so didn’t have a camera 🙁 So you’ll just have to put up with my description, make of it what you will!

The location is a small undulating grassed hill (apparently called Mt Sunday @ 611m MSL according to the 260 map) with a rocky outcrop on top and several smaller ‘hillocks’ surrounding it. It’s in the middle of a large stoney braided river valley (the Rangitata river) completely surrounded by the impressive terrain of the Southern Alps, some of which have cool names like Black Mountain, Battleaxe Column, Scimitar Peak, The Sentinel, Hells Gate, Crossbow Saddle and The Brabazon Range (irrelevant I know but I thought they were appropriate!).

It appeared to me that were actually three sets located together, but the closest I could get was several hundred metres away so it was hard to tell.

On top of the outcrop was a large 2 storey (wooden?) building with a statue of an animal (a horse?) on top. There were also another 4-5 smaller buildings of various shapes in front of this this, all in the same medieval style. To me it looked like a large meeting hall located in a village, my guess is something to do with Rohan?

At the bottom of the outcrop was a large long wooden medieval building with gates in front, it looked rather like an inn, but could have just been a large homestead. I’m not sure whether this was part of the same set as the meeting hall or not, my guess is not.

Located ~50 metres in front of this on a gentle slope was a series (8-10) of large grassed mounds some of which appeared to have doorways in them, there was a dirt track winding through these uphill. I instantly thought ‘hobbits’, but now I’m not so sure, perhaps barrows?

The crew has a small trailer park/equipment setup a few hundred metres away, and on the drive out I was passed by 3 expensive looking 4WD vehicles going towards the set. Whether they contained ‘stars’ or even The Man himself I’ll never know 🙂

Talking to the staff at the the skifield/station, the crew is apparently on location for 5 weeks, during which they need ~6 days of filming! (I’m not sure how long they’ve been there so far) They’ve hired out every available bach (the word in NZ for a small holiday home) at Lake Clearwater (~15km away) for the duration, something the owners are happy about because they’re getting paying a sizable sum for them (I happened to meet one).

One of the stations staff members apparently ‘accidentally’ rode her horse into the middle of the set one day and was runoff by security, I would have tried this too but I can’t ride a horse to save myself!

Hope this is useful/interesting, it certainly made my holiday!