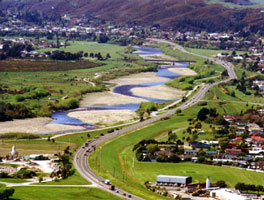 Turns out the ‘set’ is on Craigs Flats, a plateau on the far bank of the Hutt River, above the earthquake fault scarp, on private land. There is nothing much there apart from the lights, reflector boards, cameras and a large marquee. They had the lights blazing away at 7:10am today.

On the near side of the river, next to the road, is a small village labelled “Jamb, Make-up, Costumes, WETA”. This is cordoned off by security guards and concealed from close view by the natural landscape, although it’s possible to see the tents and vans from a distance.

It’s only 5 minutes drive from Dry Creek Quarry (Helm’s Deep) so maybe one of your camera-capable spies from there could help out with photos.

The picture shows Craigs Flats as the green, grassy plateau just above halfway up the right hand edge. This is where they are filming. The darker earthquake fault scarp between the plateau and the river is clearly visible.

PS: Anyone commuting between the ‘dressing rooms’ and the set has to cross the Moonshine Bridge.