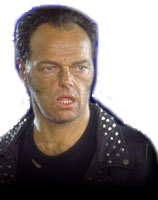 News comes from NZ regarding Kiwi actor Bruce Hopkins. Apparently Hopkins has been cast, however we have no idea as who. Any ideas?

Yep! (says Tehanu) Gamling the old, we’ve heard. He’s the old codger that lives in the Deeping Coomb, and takes part in the defence of the Hornburg.

“Gamling the Old looked down from the Hornburg, hearing the great voice of the dwarf above all the tumult. “The Orcs are in the Deep!’ he cried. ‘Helm! Helm! Forth Helmingas!’ he shouted as he leaped down the stair from the Rock with many men of Westfold at his back.”

Hopkins has been making films since 1991 with a debut in ‘Linda’s Body’, he also ran the ‘Xena, Herc, Cleopatra’ gauntlet as well, and yes, I’m waiting to see what role he had in Shortland Street…

More info as it makes its way available.