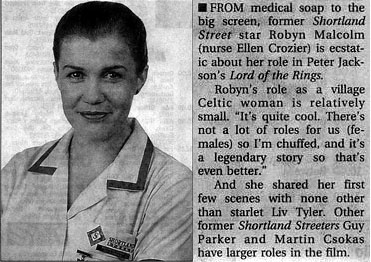 So, you read that article and think ‘who is this Guy Parker?’ Well I can tell you with some assurance that Guy Parker doesn’t exist..

What are you Tolkien about Xoanon? (sorry, had to use that)

Well, I think the reporter accidently had accidently mistaken some of the Shortland Street ‘characters’ names and the ‘actors’ names. IMDB has a listing for a ‘Guy Parker’, but no mention of him being in ‘Shorland Street’ and IMDB (Bless their little hearts) are almost never wrong.

Secondly, and this is the glincher, is that kiwi actor, and all around cool guy Craig Parker (Haldir) was on ‘Shortland Street’ playing a character named, Guy Warner.

So that’s the end of that story 🙂