Television New Zealand’s One Network News ran an item today about the search for horse riders for LOTR. A trials day was held at Rangoira (South Island, a few km’s North of Christchurch) under the supervision of chief horse wrangler Steve Olds. (That’s him standing on foot in the middle of the cavalry charge in the middle pic).

The riders were being trained in riding “like you are going to war” and keeping in formation.

The item said that the riders would be required for filming in September. Will the lucky few be Rohirrim on the ride of the Host of Rohan to lift the siege of Gondor? Time will tell.

All video capture attachments are from the “One Network News” broadcast. 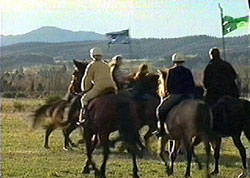 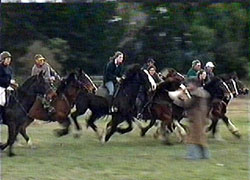 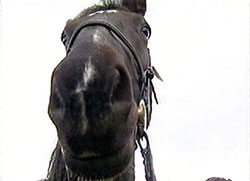