This was in our mailbox today: 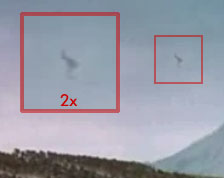 “I was going through the preview frame by frame when I came across something that I hadn’t seen anyone mention before. At about the 46 second mark, something appears for an instant in the sky over the orc armies. A winged nazgul, perhaps?” – T

Upon further review, I cannot account for the mysterious appearance of this apparently winged creature flying above the armies! Could the winged nazgul been an original part of this shot and that specific keyframe was accidently left in when they released the Internet Preview? Since this is a digital shot, I would be mighty surprised if this is just a random dot. Then again, it could absolutely nothing! heh. Thats the fun part, we may never know, but its fun to guess!

Thanks T for the tip!