The Official New Line Cinema Site is up! You can now check it out for great stuff! More to come! 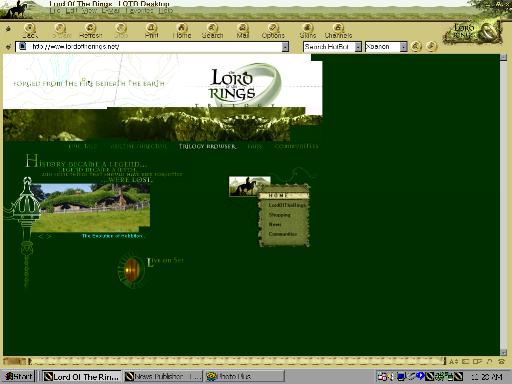 The site is divided into 6 main sections, the first ‘An Epic Tale’ allows you to sign up for a mailing list where you can be informed on all the latest New Line Cinema news:

In 1997, The Lord of the Rings trilogy was voted Book of the Century. Now the world is about to experience this groundbreaking tale of good and evil brought to life.

This long-awaited screen presentation of J.R.R. Tolkien’s The Lord of the Rings trilogy will be shot exclusively in New Zealand over a period of 18 months, with post-production adding yet another year and a half. At three years in the making, this will be the largest production ever to be mounted in the Southern Hemisphere.

Written by Oscar-nominated screenwriters Peter Jackson & Fran Walsh, with Philippa Boyens and Stephen Sinclair, this technically challenging production will assemble an international cast, utilize over 20,000 days of extras, employ a full crew of over 300 (including award-winning, high-profile technicians from both within and outside of New Zealand), and will feature 1,200 state-of-the-art computer generated effects shots.

Peter Jackson’s Wellington-based production company, Wingnut Films Limited, together with the special effects company WETA Limited, have been involved in developing and designing this realization of the Tolkien classic for more than two years. During this time a stunning array of miniatures, creatures, prosthetic effects and armor have been created to bring the grandeur and spectacle of Tolkien’s richly evocative Middle-earth to life on the screen.

WETA Limited, New Zealand’s leading Special Effects house, continues to focus all of its efforts on this one project. Dedicated to meeting the exacting visual and technical requirements of Director Peter Jackson, WETA Digital is developing its own proprietary programs and using state-of-the-art motion control, blue screen and forced perspective techniques to achieve his vision. The people and creatures who populate Middle-earth, as well as their homes, cities (and lairs) are being conceptualized by WETA Workshop with the guidance of Alan Lee and John Howe. Alan & John are internationally recognized Tolkien artists.

New Zealand is Middle-earth. Geologically a young country, New Zealand is a wild mix of diverse terrain, which brings with it a sense of grandeur and antiquity. Peter Jackson will use the peace and tranquility of New Zealand’s rolling pastoral farmland, the rugged beauty of the North Island’s volcanic plateaus, and the majesty of the South Island’s snow capped Southern Alps to bring the screen his interpretation of how Britain, Tolkien’s Middle-earth, might have looked 7,000 years ago.

Since the public announcement by New Line Cinema in August of 1998, international interest in this project has been overwhelming. Internet sites devoted to the trilogy have attracted a record number of hits and thousands of approaches have been received by the production company from people wanting to be involved in the project both behind and in front of the camera.

The second section ‘Ask the Director’ let’s you the fans ask PJ some questions he man answer! (more news on this comming soon!)

Making The Lord of the Rings Trilogy will require 16 months of filming, using the same actors and crew on location in New Zealand.

We will solicit questions from Lord of the Rings fans around the globe here on the official site, as well as through the legions of devoted fan sites. From the questions you submit below, we will select 20 of the most intriguing and give you the opportunity to vote for the top 5. In addition, selected fan sites will be asked to submit two question from their members.

This is your chance to ask Director Peter Jackson about this historic production. These questions will then be posed to Peter Jackson during a live event which you won’t want to miss. We’ll notify you by e-mail when it’s time to vote!

The 3rd section ‘The Trilogy Browser’ is a link to their download of the browser for LOTR:

Transform your browser into The Shire! With a custom look and function, the official Lord of the Rings Trilogy browser lets you dive deeper into Middle-earth. Custom skins will allow you to change the appearance as often as you like, from Moria to Mathom

The 4th section ‘Fans’ is all about you guys, the fans!

When J.R.R. Tolkien released The Fellowship of the Ring in 1954, the world responded to its universal themes and fantastical storytelling with the kind of adoration that elevated its creator to a stature nearly as iconic as that of his characters. Tolkien followed with two more volumes, and the Trilogy soon garnered an overwhelmingly devoted world-wide audience rarely encountered with a work of fiction. If Tolkien only knew how the Web would unite the Trilogy’s following.

Today, the enormous ring of Trilogy fan sites that keep the flame burning is astoundingly active. As this Official Site reveals the development of the Trilogy films, we encourage exploration of and commentary on those developments on your own sites. We hope to create a gathering place for all the Web’s disparate Trilogy communities, highlighting works, commentary, and voices from those sites right here on our own. We extend a hand to all Trilogy sites to come along on this very special journey and consider yourselves an important part of this latest adventure.

We look forward to incorporating selected highlights from the fan community as we expand our site.

The last section ‘Communities’ is a link to the Neoplanets Official LOTR Club that has been up and around for a while.

But it’s the last section ‘Live on Set’ that really interesting. It features a person live on the set, walking around with a recorder, telling us what’s going on that day! Very interesting!