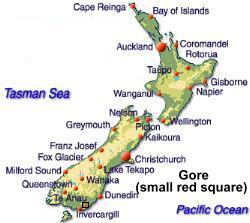 According to my contact there has been some filming done about a fortnight ago in Central Otago near a little town called Gore. They were most likely filming scenes with the Riders of Rohan.

Also he/she said he/she shot some scenes at the Hayward Quarry, which according to Tehanu is the same as the Dry Creek Quarry were the Helm’s Deep set is built. I’m not sure if there were any special sets like buildings or such being build near Gore, I asked him/her, but he/she didn’t answer. I’ll be in the Queenstown/Glenorchy area in a few days, so I’m gonna take a look around. I’ll plan Gore in the schedule as well.