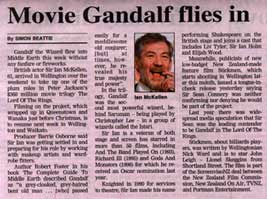 Gandalf the Wizard flew into Middle earth this week without and fanfare or fireworks.

British actor Sir Ian McKellen, 61, arrived in Wellington over the weekend to take up one of the plum roles in Peter Jackson’s $360 million moive trilogy The Lord of the Rings.

Filming on the project, whick wrapped up in Queenstown and Wanaka just before Christmas, is set to resume next week in Wellington and Waikato.

Producer Barrie Osborne said Sir Ian was getting settled in and preparing for his role by working with makeup artists and wardrobe fitters.

The remainder of the article goes on to describe Sir Ian’s career on stage and screen.

Thanks to Kevin R for the tip!