Thanks to Julius for the tip!

Lords of the lance

For a couple of months Fort Dorset, and abandoned Army base built on a finger of land jutting into Wellington’s Port Nicholson Harbour, has been ringing tot he sounds of war as a horde of extras and stuntpeople practise Middle Earth battle routines for the epic The Lord of the Rings shoot. Amid the smoke and dust, Onfilm spoke (by telephone!) to their general, Bruce Brown.

What’s your role with TLOTR?

I’m the New Zealand stunt coordinator. My company is Stuntworx, which is owned by myself and my partner Elaine Newell. She’s a stuntwoman and a pilot for Freedom Air. Elaine works on TLOTR sometimes, when it fits in with her flying.

How did you get the job?

I was stunt coordinator on The Frighteners and Jack Brown Genius with Peter Jackson, and I did Aberration for TLOTR producer Tim Sanders. I guess they were happy with the work I did for them.

When did you get the job?

We’ve been chatting about it for well over a year – since I knew the project was coming up. I’ve got 20 people, including two woman, on the job now – most of them have been training for a year, prior to even getting the job, practising different fight sequences and styles, to be ready. They’ve all relocated to Wellington.

Are there a lot of stunts in TLOTR?

A hell of a lot. Fight sequences, falls,burns, horse stunts, and battles. Of course, these three films are being shot as one, with breaks in between.

There are many character and races involved in the story – each race has a unique, body language.

We’re trying to capture something that’s not been seen before, and adapting the body language into fighting styles in the leadup to the shoot.

Can you describe some of the stunts?

There’s some falls where the guys get shot with arrows off a cliff into rapids, there are guys scaling massive ladders up castle walls and the ladders are being pulled back as the invaders are shot off them by arrows. We pivot the ladders at the bottom, and have the stuntpeople falling onto an airbag.

And then there’s stuntmen falling off castle walls into these new crashmats we’ve come up with. With high falls you normally use a double airbag.

I went to the States and bought a lot of new equipment, including a double bag. It has two fan blowers and a bottom layer that’s four feet thick, and above that another layer six feet thick, and it’s 30 feet by 25 feet across. It’s rated to take up to 80 foot falls.

But the problem witht he airbag is when you fall into air escapes and it collapses, then you have to wait for it to reset. With a normal gym foam crashmat, it’s 16 inches or 400mm deep, and it’s 1.5m wide by 3m long. But a body only absorbs onto the mat by about a quarter of its depth.

So we designed a foam mat with solid foam on the outside, and it has longitudinal hollow sections running lengthwise and crosswise, vents on the sides and ends of the mats. Two of these – one on top of the other – enables us to do a 40-foot fall into two stuntmats, which means you can be in, roll off the mat, and within a second or two you can have another guy in behind you. It speeds up the process. We can have 10 guys going of the wall at once, and another 10 right behind, rather then one at a time into an airbag.

We’ve tested these mats up to 40 feet. Anything over that and we’ll go back to the airbag. The mats were built to our design in Auckland by the Boat Cover Company.

Tell me more about the fighting styles? Are they

recognisable, or did you ‘invent’ them?

They’re styles developed for each particular character. Some are creepy and cockroach-like, some are quite smooth and dainty – flowing gracefully, and some are just crash-bash-nothing-stops-them killing machines.

How do you devise the fight sequences?

We’ve been very lucky … the production has brought out a chap called Bob Anderson, who’s the world’s top swordmaster, An amazing guy – he’s 77, and he worked with Errol Flynn. Even now, he moves like Bruce Lee. When he has a sword or weapon in his hand, he makes the hair stand on end. He’s English, an Olympic fencer. He’s done all the Zorro films and and TV series, he did First Knight and all the Highlanders, and he played Darth Vader in all the early Star Wars films.

He’s been taken on as TLOTR swordmaster, to choreograph the weapon and fight sequences. We get on like a house on fire.

There’s also plenty of explosions, as well as sfx with Steve Ingram. He’s got a massive job ahead of him, the equipment he’s building is out of this world. He and his team have built the biggest wind machine you’ve ever seen, 450 horsepower and a V8 engine. It will blow you over.

The Wizard Saruman creates a primitive form of gunpowder. There is a battle scene where castle walls get blown up.

Have you read the book?

Only since I know the movie was happening. My oldest son is 18, and he’s been reading TLOTR since he was eight, and I didn’t realise what I’d been missing.

The aim is to stay close to the book?

Very much. To every last detail.

Does Peter Jackson get involved personally in the stunt sequences?

In everything. He scripts everything, and then we break it down and come up with a sequence. We rehearse it, and then we shoot it on video, usually at a Wellington site that resembles the action location – we’re not going to Queenstown to shoot a rehearsal when we can find something similar in Wellington. Then Peter’ll view that, say whether he likes it or wants to change something, then we’ll lock it down. We do two or three of these tapes a week.

Does he direct these sequences?

Not when we rehearse. Bob Anderson and myself direct and shoot them – pretty roughly, but close enough so Peter can make a judgement.

Do your people do any horse work?

No, we’ve brought in nine riding specialists … there’s some galloping chase sequences where nobody’s coming off, but they’re going very fast. There are a few falls, and we have specialists to do those, and pulling the horse down.

How do you approach the script?

We started by breaking the script down and working out the action, then we made lists of equipment we need. I went to LA, not only to check out the latest airbags but also air rams, which are platforms that when you run on them throw you 60 feet in distance and 20 feet in the air.

I also bought are ratchets which are for falls, and jerkback rigs. Rather then using airbags or a mat for a fall you can use an air ratchet. It’s a wire that attaches from a harness on your back up through some pulleys and through a purchase system and then down to a pneumatic cylinder. If in the one shot you need to have someone jump 50 feet, leave, fall all the way to the ground, hit the ground and run off, this system allows you to freefall for, say, 40 feet on a slack wire.

Then the wire takes up and runs a pneumatic ram out, and as it pulls to its full length, it slows and slows down your fall. You can set it so you actually step off onto the ground.

We also bought all sorts of flying rigs, so that if someone is being thrown 50 feet through the air they can be spinning around and look like they’re doing somersaults as well. That’s what we use the air ram and air ratchets for. I brought some back from LA, and Steve Ingram is developing some new ones. Normally, they just fire one way, but he’s developed one that’ll fire in and out – he’s got two-way control over it, which is pretty unique.

You can have a scene where you’re standing on the ground, and you’re hit by, say, a magical staff which throws you at 45 degrees from the ground straight back and up, say 50 feet in the air, and then pulls you back 30 feet. And that’s the end of the shot, then it just lets you down to the ground.

There’s a lot of rigging in it, I’ve got a guy, hopefully, coming down from the States who specialises in the rigging of those gags, name of Tony Snegoff.

Is your stunt crew going to grow?

We’ve got the core group of 20, and then we’ll be using extra action people – a B group if you like – for the odd sequences like battles, where we need a lot more stunt people.

When armies meet in battle, the front row are actors and stunt people, then we’ll fit in army and extras behind them. When we have two or three hundred extras to train for a fight sequence, each of my guys takes 10 or 20 extras and teaches them a fighting style. Then they put it all together and keep an eye on each group when we shoot it.

It’s quite dangerous because extras can hurt you when they’re flinging blades and staves around.

We screened all the extras in audition to make sure they’re of stable character. When the casting people brought them back for a second interview, we put a sword in their hand, paired them up and had them do a few parries and ripostes. You soon see if people have coordination and skills. Some of them we marked: “NO WAY. NEVER EVER TO GO NEAR A SWORD”.

The weapons were designed and built by Richard Taylor from Weta, a process that’s taken months. He runs the designs by Peter Jackson. Many are unique, and that’s something Peter wanted – weapons that had never been seen before. The period in which the film’s set – in pre-history in Middle Earth – precedes the eras we know of, and every fighting style that exists today. We want the audience to look at our styles and say “oh, that’s where this modern style of fighting came from.”

The styles are specially developed, rather than being classical karate etc?

Exactly. Very natural and realistic fighting. None of this television series bullshit where somebody gets hit in the head and does five backward somersaults.

Bob Anderson says the quality of the weapons is the best he’s seen in his career. They’re made of rubber, composite, kevlar, aluminum and carbon fibre but they can definitely inflict real damage. We’ve had no serious injuries – just a few nicks and bruises among my guys, but that happens when you’re pushing things to the limits. There’s little room for error, and we’re often working very close for things to work to camera.

Can you talk about locations?

All over.They really look after you. Peter Jackson seems to stick with the same people and he knows how to keep people happy. He never raises his voice or loses his rag. He’s open, and that’s really helpful when you’re doing stunt work. You can put things to him, and if he doesn’t like them he says so. When he does like something, his face lights up. 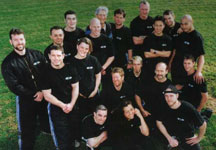 RINGMASTERS: he stunt team on location in Seatoun for The Lord of the Rings. Brown is the shorter, dark-haired figure in the centre at the back; Bob Anderson os on Brown’s right.

An air ram and a ratchet, one is used to launch a stuntman in the air, the other is to let one jump from high places with saftey. I’ve seen the ratchet in action in some behind the scenes work in Men In Black.

A large mat used for high jumps. All images thanks to ‘Actionpac.com’ and are NOT from the LOTR set.