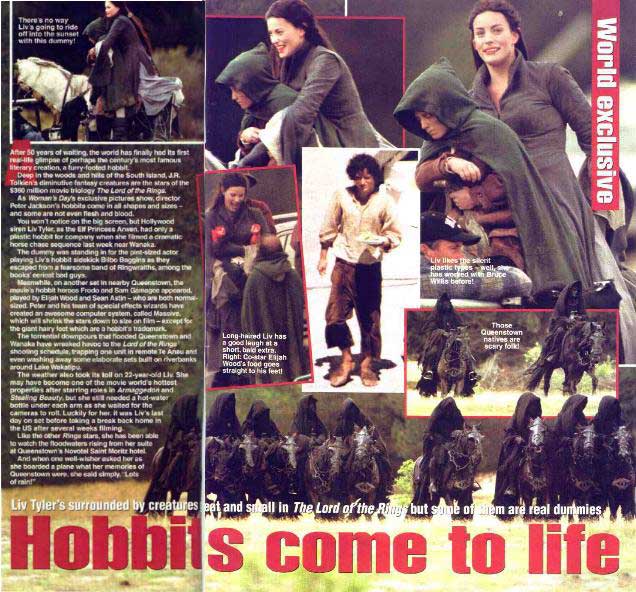 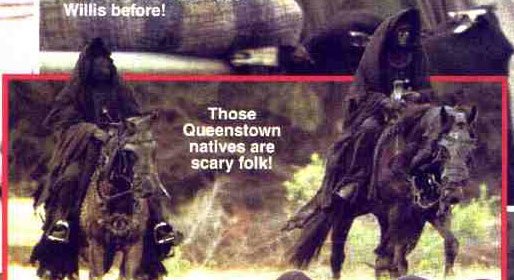 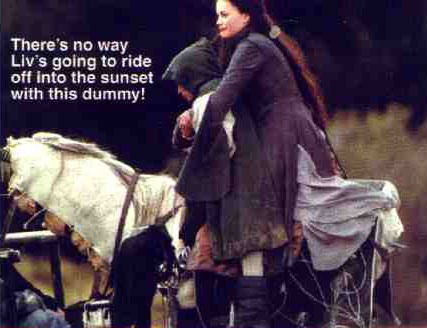 Liv Tyler’s surrounded by creatures great and small in The Lord of the Rings but some of them are real dummies.

After 50 years of waiting, the world has finally had its first real-life glimpse of perhaps the century’s most famous literary creation, a furry-footed hobbit. Deep in the woods and hills of the South Island, J.R. Tolkien’s diminutive fantasy creatures are the stars of the $360 million movie trilogy The Lord of the Rings.

As Woman’s Day’s exclusive pictures show, director Peter Jackson’s hobbits come in all shapes and sizes – and some are not even flesh and blood.

You won’t notice on the big screen, but Hollywood siren Liv Tyler, as Elf Princess Arwen, had only a plastic hobbit for company when she filmed a dramatic horse chase sequence last week near Wanaka.

The dummy was standing in for the pint sized actor playing Liv’s hobbit sidekick Bilbo Baggins as they escaped from a fearsome band of Ringwraiths, among the books’ eeriest bad guys.

Meanwhile, on another set in nearby Queenstown, the movie’s hobbit heroes Frodo and Sam Gamagee appeared, played by Elijah Wood and Sean Astin – who are both normal-sized. Peter and his team of special effects wizards have created an awesome computer system, called Massive, which will shrink the stars down to size on film – except for the giant hairy feet which are a hobbit’s trademark.

The torrential downpours that flooded Queenstown and Wanaka have wreaked havoc to the Lord of the Rings’ shooting schedule, trapping one unit in remote Te Anau and even washed some elaborate sets built on riverbanks around Lake Wakatipu.

The weather also took its toll on 22-year-old Liv. She may have become one of the movie world’s hottest properties after starring roles in Armageddon and Stealing Beauty, but she still needs a hot-water bottle under each arm as she waited for the cameras to roll. Luckily for her, it was Liv’s last day on set before taking a break back home in the US after several weeks filming.

Like the other Rings stars, she has been able to watch the floodwaters rising from her suite at Queenstown’s Novotel Saint Moritz Hotel.

And when on well-wisher asked her as she boarded a plane what her memories of Queenstown were, she said simply. “Lots of rain!”

Thanks to Julius for the tip!