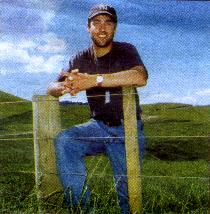 Filming has just begun on the Hinuera set of the Lord of the Ring’ Hobbiton.

And after problems down south (flooding – Xo) things could not be looking better, says second unit producer Rick Porras, pictured above on location.

Mr Porras works with known Hollywood name Bob Zemekis who is perhaps best known for his part in bringing ‘Who Framed Rodger Rabbit’ to life, and being excutive producer on ‘The Frighteners’.

“but this is the greatest production I’ve been in, it’s a real opportunity to be working on this movie,” says Mr Porras whose own credits include ‘Forrest Gump’, ‘The Frighteners’ and ‘Contact’, with Jodie Foster.

The second unit’s job is to get the feeling of where the hobbits live, the friendly warmth of the scenes and so on, he says.

“The tight green hills here are perfect – you can just imagine other Hobbits and Hobbit houses just over the next hill,” says Mr. Porras, “We have timed shooting perfectly, with brilliant weather overhead, but beautiful, lush grass.”

The shots may be wide and work with 120 extras – the first unit crew will film individuals – but the film crew is working to a tight shot book.

The Hinuera film site, as were all that are used in the movie, was found by a scout who travelled the country talking to locals and searching for the perfect spot.

But while the magic is being captured on film, the long length of time spent on preperation for film will not be so easily recognised, says Mr. Porass.

“The two movies, Back to the Future parts II and III were filmed back to back, which was seen as a big undertaking, but I arrived here in May last year to start over a year’s preperation,” he says.

The Lord of the Rings is the first Hollywood production to film three movies back to back, says Mr Porras.

Unfortunately, parts of the preperation were swept away while the film was recently filmed around Queenstown.

“I was in Wanaka at the time and it set some filming back,” says Mr. Porras, “I think it was an all-time record rainfall while we were there, and Te Anau was similar.”

But judging by the film’s special effects, such concerns should not bother, he says.

“The Special effects work being done at WETA Studios (the film’s base in Wellington) is amazing.”

“Peter Jackson (LOTR Producer, Director, and driving force) and Fran (Jackson’s partner and co-worker) are amazing to watch working and they are nice people too,” says Mr. Porras, “When these movies are over he’ll be satisfied, it’ll be his life’s work.”

After a Christmas break, the first film unit will return to Hobbiton early next year, and more extras will be involved at that date.

Thanks to Captain Asparagus for the tip!