It seems work has begun on the Lord of The Rings Official Site from New Line. A shorter and sweeter press release from October is available here. 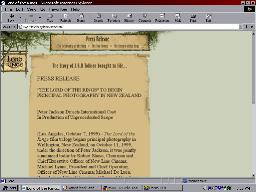 In related news Web Designers ‘Angry Monkey’ will not be designing the Official Site, though they did do the work that you’ll find on the site now, they will not play an active part in any LOTR related work in the future.

A spokesperson for Angry Monkey said “we simply chose not to any more websites for movie studios. there’s nothing about new line or lord of the rings in specific that led us to that decision — it was more of a top level business decision for us.”

It seems that New Line pulled the plug on the /beta section of the official site. That’s what you get for snooping…lol