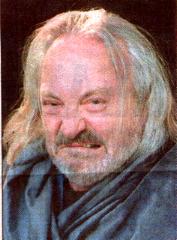 Here I was, standing outside the gates of the Stone Film Studios in Miramar, ready to help make a movie – Lord of the Rings.

Over the years I had worked in TV, radio and stage as a singer/actor, but I had never stepped on a film set. I was here to shoot a medieval pub scene with 20 other guys made up to look like unkempt, grotty pub patrons.

When I got the part I was so excited I told everyone I knew and even a few I didn’t on the streets of Tawa – and in Woolworths. The doctor’s surgery was a good place too.

I will never forget walking on to the set for the first time. It was like Hollywood. Huge monster trailers with plush interiors for make-up, trailers with cameras, lighting and technical equipment, hundreds of people moving quickly about. It was intoxicating. With my personal minder I was taken to wardrobe and dressed in a heavy medieval costume which was blackened to look grubby. My shoulder-length hair and beard were rubbed with dirt and my teeth painted gray.

When all the men had finally completed wardrobe and make-up we were herded together in a large room which was to be our green room between shooting. Photos were taken of each of us for continuity reasons; this was to make sure we kept our original appearance throughout the shoot.

The floor manager gathered us together and warned us not to wander around the studio as the sets and other things were highly secret. After we all nodded in the affirmative he took us to the studio where filming was in progress. We went from bright sunlight into total darkness. Blinded, some people tripped over secret things. Bugger! Curse! We were greeted with;

As I entered that place I felt an emotion I find difficult to describe. I was in awe, this was my utopia. I was enraptured, besotted, in love. It was almost sexual. I stood there trance-like and almost missed getting on to the set. Everyone was given positions in the pub.

Someone called my name and I was quickly brought back to reality. I was the last to walk on the set and was seated alone in a corner somewhere. I looked around and studied my situation – where were the cameras?

There’s one over there….Bugger, I’m not going to be in this shot. Never mind, light your pipe. Look slowly around the set. Look really mean. Camera or no camera, I was determined to play the part.

After final adjustmentsof lighting and technical matters, I heard the magic words;

From my great distance from the action I heard the clapper board go “whack” and the words;

“The Prancing Horse…..Take 1…..Action…..Cut.” All this time I had been searching the set for a glimpse of the great man, Peter Jackson.

Then I saw him. Quite a large chap, a bit portly I thought, with black curly hair. He was busy repositioning some lights and talking to what looked like a little person. This was my first look at a Hobbit. Peter Jackson spoke. Hush descended.

“We are going to try another take,” he said, “and this time I want a bit more noise, sound more like a pub.”

I was a bit far away, but during the take I uttered a few arggh and rhubarb sounds, I tried my best. I was dwelling on my misfortune of being out of the frame when I heard someone ask;

“Well Eddie, come and stand over here and when I say action I want you to walk across the room on a collision course with that little Hobbit over there, who will be walking over to the bar. When you reach the Hobbit I want you to almost collide, looking down at him with a mean, angry look”

This is it, I told myself.

I strode across the floor toward the Hobbit with a mean look on my face, furiously puffing on the clay pipe – and missed the little bugger by about a foot.

“What’s your name?” I heard Peter Jackson ask me. I saw every face on the set looking at me, everyone.

“Eddie McCarthy,” I replied, trying not to show any nervousness by deepening my voice.

“Eddie,” PJ said, “try to get the timing right this time, all right?”. My God…..Peter Jackson spoke to me……he knows my name.

After completing the take, we stopped for lunch and were herded back to the green room by our minders, photographed again for continuity, then led to the canteen. We were the last to eat the last of the food, which by the time we arrived was sparse, but I was flush with adrenaline and on a high. Who want’s to eat anyhow?

Later we waited just off the set for assignments when the assistant director called,

“Who was the gentleman sitting on his own in the corner this morning when we started shooting?”

I stood up and shouted,

“Follow me,” she replied. She asked me to sit down at the table, which was situated in an alcove that had bay windows with small, square panes of glass. Very quaint. Suddenly I was surrounded by lighting technicians and other production staff. The head cameraman with a huge camera that took two people to carry and operate, was no more than a foot from my face. He checked the lighting with his light meter and proceeded to measure the distance between the camera and my nose.

The make-up lady was checking to see if I was grotty enough, and wardrobe was checking my costume. Move this way Eddie, look up, look down, dribble the beer down your chin. I was getting the star treatment. Where am I? Is this the TV show “Make A Wish” and my wish was being granted? Stay cool, I tell myself, let it happen.

I spot the casting producer who auditioned me in a house in Willis St earlier in the year.

“Hello Eddie,” she cries, “just do it like you did at the audition.” Then the sound of that clap-board and the shout of “Take 1…..and Action”.

Ten seconds of close-ups playing a crazy drunk, it was easy. The words “Cut and print” still ring in my ears, then walking off the set with people telling me,

“Well done, well done Eddie.” My wardrobe girl giving me five and telling me I did a feature.

We filmed a few more scenes then wrapped up for the day around 8pm. My word, 12 hours, where did the time go? Went to wardrobe and changed into my street clothes and didn’t bother to remove the make up. I had to show the children to convince them that I had actually worked on a film!

Before I went home I checked with production for the next film schedule and was told that since I was featured witha lot of close-ups that day I wouldn’t be required the next day, they would be in touch later in the week.

Alas, that was a month ago. I think my filming day’s are over as the crew are now shooting in the South Island. Hey, I heard they’ve started shooting Ivanhoe in Wellington!