Sutherland not in After All? 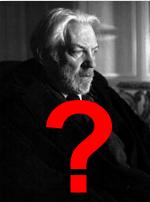 TheOneRing.net was recently contacted by Donald Sutherland’s publicist and agent.

She told me that the news of Donald being cast in LOTR was ‘News to her’ and that they have not been approached by anyone.

This, I find as a dissapointment, but there may be yet more to the story, as all these things are never set in stone.