Resevoir Dog sends in this from a magazine. It’s an add to buy Sean Bean’s ‘Sharpe’ episodes on video. The text reads: 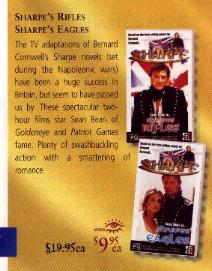 The TV adaptations of Bernard Cornwell’s Sharpe novels (set during the Napoleonic wars) have been a huge success in Britian, but seem to have passed us by. These spectacular two-hour films star Sean Bean of Goldeneye and Patriot Games fame. Plenty of swashbuckling action with a smattering of romance