A Lord of the Rings film set has been washed away by floodwater near Queenstown. About 300-400 crew and cast have been filming the $360 million film trilogy near Queenstown, Wanaka and Te Anau for the past 10 days and will be in the area until Christmas. Producer Tim Sanders said today filming was delayed in some locations because of flooding and bad weather. Some locations could still be used in the next few weeks when they dried out, but others wouldn’t be ready until the film crew returned next year.

Mr Sanders said one set of some ruins had been washed away. “It wasn’t a huge set, but we had some ruins for one of our scenes along the Kawarau River, built on a beach setting. The beach, and the ruins and the whole area were suddenly 5m under water,” he said.

“The great irony in all of this is that we had a set built in a studio here [in Queenstown] for wet weather purposes. We couldn’t reach it because we were cut off in Te Anau. Now that we’ve finally made it to Queenstown, it’s the only thing we can shoot on because all our other sets have washed away. And [today] it’s beautiful weather.” Filming in Wellington will resume about mid-January.

Here are some images from Karawau River: 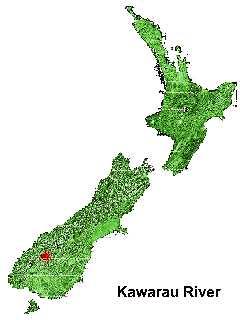 Thanks to Buzz for the tip!