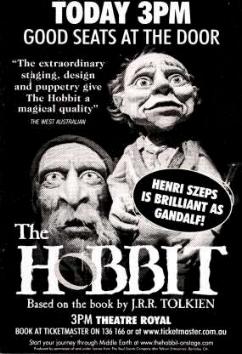 and goblins and elves

There’s nothing to beat the thrill of a shivery, skin-prickling fright when you’re a kid. My childhood fascination with scarifying literature ranged from the sadistic cautionary tales of Strewelpeter, which make the Grimm Brothers’ stories look like the work of a pair of sissies, to the Victorian Gothic of Edgar Allan Poe.

As much as I enjoyed this visually stunning production, which combines superb puppets (small, large and extra large) with amazing lighting effects and a strong musical score, the highest praise I can offer is that I wish I could see it again through the eyes of a 10-year-old.

Not that I had difficulty being transported to Tolkien’s Middle Earth (sic), Henri Szeps, hidden behind a lengthy grey beard, plays the wizard Gandalf, who narrates the story as well as proving to be quite handy with a “goblin cleaver”

Bilbo Baggins, pint-sized Hobbit, is recruited by Gandalf for his band of crotchety dwarfs (sic) and they’re off in search of Smaug the dragon, a huge pile of gold and along the way some “nasty, disturbing, uncomfortable” adventures.

If this rough outline sounds overly familiar, then it’s because the same mythology Tolkien drew on continues to be reworked by his imitators, In the space age Bilbo would be Luke Skywalker, Gandalf Obi-Wan Kenobi and the dragon’s lair the Death Star. What’s missing, regrettably, is a princess, because there’s no much in The Hobbit to temper all that masculine energy.

Guest reviewers for the evening, Joshua (nine) and Eliza (12), loved it. Josh couldn’t decide whether he like the dragon (which is spectacularly huge, has fiery red eyes and belches smoke) the best or the lumbering, dim-witted trolls. Eliza was particularly impressed by the fine detail in the look of the dwarfs (sic) (Philip Millar designed the puppets).

And as their mother pointed out, when the 11 puppeteers step forward to take their curtain call after two-and-a-bit hours of goblin bashing and giant spider slaying, this is one fantasy that’s clearly over. There’ll be no need to check what’s hiding under the bed when you get home.

At $140 for a family of four, parents may hope they too had a share of the dragon’s gold: a special pre-holiday treat perhaps.

Thanks to Trufflehunter for the article!