Wet Ringer Spy Ian sends more on the flood waters which have been a problem for the production. Fom my sources, I hear at least one set may be washed away.

ust to clarify – the slip on the Queenstown-Frankton road hasn’t actually covered the road (yet) but serious cracks have developed in the road and the slip still threatens to carry the road into the lake. 11 houses have been condemned, their owners prohibited from ever returning to them. Other houses remain evacuated, with owners allowed to temporarily return to gather important possessions. As a precaution the residents of another 13 properties were evacuated around midnight last night. 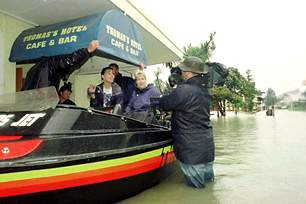 Until “geotechnical tests” have been completed the roading authorities do not know if the road can be fixed or if it needs rebuilding completely. Until then it remains closed, and Queenstown remains pretty much cut off. 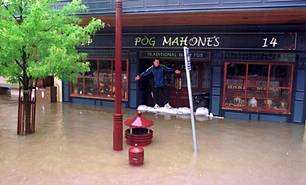 A shot on the TV news last night of a guy on the other side of a very flooded street holding up a bag of money outside a bank: “They must have been laundering the money – it’s all wet.”