Ian updates us on the flooding situation down under:

– Lake Wakatipu is well above 1878 record and still rising slowly.

– Water lapping at windows of shops in Queenstown, and remains waist deep in places. More than a third of the central business district is under water.

– 30 houses have been evacuated due to a half kilometre wide landslide on the Queenstown-Frankton road that threatens to keep moving.

– Not all bad, though – some trucks have managed to make it in with bread, milk, and bottled water, which supermarkets and cafes have run out of.

– Telecom has issued a plea for people in the Cromwell and Wanaka areas (just up the road from Queenstown) not to use their mobile phones, unless it’s an emergency. Telecom says Cromwell and Wanaka residents can make local calls on their home phones, however calls in and out of the area are unlikely to get through. Emercency calls are being intercepted by staff stationed at the telephone exchange.

– Queenstown mayor Warren Cooper said it was possible Lake Wakatipu would rise or at least stay at its high level for two to three days.

– The landslide is moving again, and evacuated homeowners are waiting anxiously for news of the state of their homes.

– Heavy snow has begun to fall in the hills around the Wakatipu basin.

– Queenstown is now in a state of civil emergency after the slip on the Queenstown-Frankton road has completely blocked the road, and is threatening to take the road into the lake. Other slips have closed roads throughout the region.

Oh, yes – especially for the poor film crew, it’s all turned to custard. Perhaps we should expect Middle-earth in the movies to be rather wet than we typically picture it. Lots of flood updates at http://www.queenstown.co.nz/ (although most deal with wider Southland rather than Queenstown). 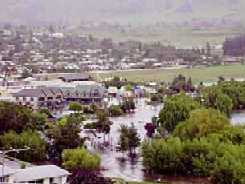