Super Ringer Spy Sam has scores some amazing pictures from the quarry set! 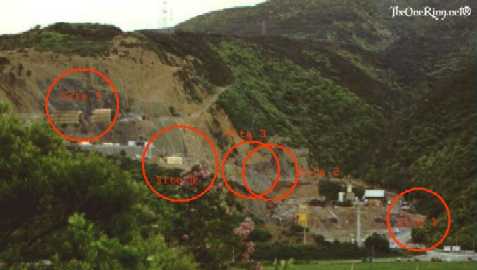 Think of Lord of the Rings. Think of The Two Towers. Think somewhere in the middle. Think Helms Deep. What images does it conjure into your mind? To me, it conjures images of resiliance, honor, bravery, strength and plain old good.

And that is what was radiating from The Dry Creek Quarry, Upper Hutt, one night. Having my evenings activities unexpectedly postponed for the night, my friend and I decided to take a chance. We got out the map and searched for the Quarry. We drove up there and parked opposite, beside another car. Thinking it probably belonged to a security guard, we had to shiver as we crossed the road towards the Quarry and the lone light that emitted from a building at the front. Or maybe it was the cold Wellington night…

…whilst marvelling at the bulking shadows in the distance (Helm2.jpg – taken from Site 1).

We moved on up to Site 2 (Helm3.jpg) which seems to be a couple of towers on a wooden platform (one tower is out of sight, to the right of the photo. They’re about 8 feet high.

Site Three (Helm4.jpg) is next door, and up a gravel bank. It consists of two walls, with gaps in between. This is from the rear and (Helm9.jpg) is from the front. Talk about huge! As of yet it’s mostly scaffolding, except the front.

Site Four is further up the hill – (Helm7.jpg). So far, from the bottom,it consists of a curved wall and a doorway, with steps carved from the gravel leading up through it. It leads up to (Helm8.jpg).

There were two other windows to the right. It can be seen in (Helm6.jpg), (Helm5.jpg) shows the wall in front of the stairs leadingup, as well as a wall to the doorway’s left.

It sure was exciting to know that *this* was where John-Rhys Davies would stand, *this* is where the orcs would charge..

Also attached are some photos from a while back of Bree, in Seatoun, from various angles.