The latest Wojciech Kilar soundtrack ‘The Ninth Gate’ has been reviewed on Filmmusic.uk.net. Kilar has been highly rumored to be very close to signing on as composer for LOTR. 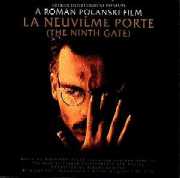 This Roman Polanski film, I understand, is about dark Satanic rites and it stars Johnny Depp in what promises to be one of his celebrated bizarre roles. The screenplay revolves around its characters vying for a certain book that includes the nine illustrations, all of them having hidden meanings.

Wojciech Kilar has created, without having to resort to synth bolsterings, a sort of modern Gothic score that must be chillingly effective in the theatre. It is certainly darkly scary in its own right.

The first cue ‘Vocalise’ – the main theme lets us into the horrors gently with slow faltering piano and harpsichord figures supporting a sweetly melancholy soprano intoning wordlessly. The title is indicative for this track is very reminsicent of Rachmaninov’s work of the same name. Clever this because Rachmaninov’s music was often doom-laden and frequently based on the Dies irae chant for the dead. This cue becomes more intense as first upper strings joining the texture followed by lower strings adding gravitas. The Opening Titles are an exercise in deepest, blackest string writing suggesting a malignant stalking menace. Higher strings add staccato stabbings augmenting the sense of deep foreboding with no relief.

‘Corso’ is a strange jazzy contrast. Over syncopated harpsichord and pizzicato strings, an assertive, domineering solo trumpet holds centre stage. The music, at this point, sounds very much like Prokofiev or Shostakovich. Then lower woodwinds continue the jaunty syncopations grotesquely before doleful strings continue the slow malignant march of the Opening Titles. ‘Bernie is dead’ is another eerie/sinister/darkly comic cue for pizzicato double basses and bassoons with piano struck in its highest register, those syncopations return for a ‘sick’ funeral march. ‘Liana’ moves the music to highest strings and treble percussion, piano, vibraphone, celeste, bells etc giving a remote, glistening other-worldly. The music is repetitive, almost hypnotic, minimalist Philip Glass-like subtly modulating and shifting dynamics. Another contrast presents itself as ‘Plane to Spain’ (Bolero) as the domineering trumpet now becomes really proud and haughty proclaiming over strong Spanish-rhythms in the strings. This part of the cue reminds one of both De Falla and Ravel but soon the rhythm slows and the mood darkens to a sense of foreboding once more. Those high pitched piano chords jar the nerves in ‘The Motorbike’ before mysterious high sustained brass chords and bells with a sort of echoing soprano solo screw the tension tighter. The ‘Missing Book’ summons back the jazzy syncopated chords with harpsichord and trumpet making sardonic comment then ‘Stalking Corso’ has spaced pounding percussion, heavy piano chords and snarling brass in frightening crescendo – the writing shows marked originality over the usual chase music.

The calm before the storm comes with the short soprano solo ‘Blood on his Face.’ ‘Chateau Saint Martin’ is an eerie exercise for high strings and percussion with muffled cymbals it sounds like the chiming of many clocks and finally mournful and finaly disonant tolling of bells. ‘Liana’s Death, ‘Boo’ and ‘The Chase’ are all creepy, Gothic, fearsome don’t look behind you cues all masterly written. But it is ‘Balkan’s Death’ that really impresses. Timpani and percussive poundings with repeated tam-tam strokes and low bassoon grumblings suggest the beast arising from the fires of hell. A devilish men’s chorus (Orf-like) reinforces this feeling of utter evil and malice. Only the soprano voice promises any relief. ‘The Ninth Gate’ is another remote-sounding soprano solo followed by mysterious high register music seems to usher in music that has a redeeming radiance. ‘Corso and the Girl’ suggests victory of light over darkness – or does it?

Soprano Sumi Jo’s beautifully pure tones add poignancy in contrast with the score’s palpable malignancy; and the City of Prague Philharmonic is on top form. An extraordinary, darkly memorable score.

Check out some audio clips of Kilar’s work here.