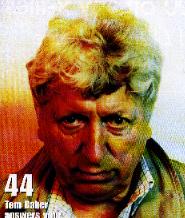 Never mind the gruff appearance, Tom Baker can easily be described as the most likable actors of Sci-Fi Retro in History. Having Helmed the coveted position of ‘Doctor Who’ longer than anyone, and being the most favorite of almost anyone who’s ever watched Doctor Who (Including me), This guy was my childhood hero.

So, a LONG while back, when it was rumored that Tom was up for the role of Gandalf, you can bet many people were excited. This month Tom Baker was interviewed by SFX, and you can bet the question came up:

Were you disappointed that you missed out on the role of Gandalf in LOTR?

“Well, I wasn’t disappointed when I heard that they had got Ian McKellen, who will probably be very good. No, I wasn’t disappointed – I wouldn’t have left my wife for 18 months in any case. I wouldn’t leave my home for 18 months for anyone or any money. That’s not on. That’s just not being serious, That’s mad. When you become an actor, I think you have to admit that you like disappointment. You’re in love with rejection.”