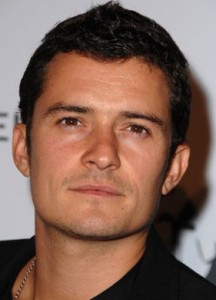 Orlando Jonathan Blanchard Bloom (born 13 January 1977) is an English actor. He had his break-through roles in 2001 as the elf-prince Legolas in The Lord of the Rings and in 2003 as blacksmith Will Turner in the Pirates of the Caribbean film series. He subsequently established himself as a lead in Hollywood films, including Elizabethtown and Kingdom of Heaven. He appeared in the ensemble films Troy, New York, I Love You,  Sympathy for Delicious, and Main Street.  Bloom made his professional stage debut in West End’s In Celebration at the Duke of York’s Theatre, St. Martin’s Lane, which ended its run on 15 September 2007. On 12 October 2009, Bloom was named a UNICEF Goodwill Ambassador.  In 2013 Bloom will make his Broadway debut as Romeo in ‘Romeo and Juliet’, and will next be seen in The Hobbit: The Desolation of Smaug (2013),  Zulu (2013), and The Hobbit: There and Back Again (2014).

Bloom is married to Australian model Miranda Kerr and they have a son, Flynn.