Alex writes: I visited the Royal Armouries yesterday to see the “Arms and Armour from the Movies: The Wonderful World of Weta” exhibit and attended the fantastic lecture by the great Peter Lyon, Sword smith. Many people came along to hear his speech. He talked initially about his work on the Narnia films and how the process from concept drawings to the fully developed weapon was achieved.

He then went on to the weapons from Lord of the Rings and described in great detail the making of the ‘Shards of Narsil’ and ‘Sauron’s Mace’, and how difficult and time consuming they were to make! At the end he took questions from the audience, and I took the opportunity to ask him directly about ‘The Hobbit’. I asked if he had been approached to make the weapons for the new film and if so what was he looking forward to making the most! 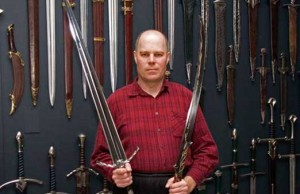 This question drew a gasp and laughter from the audience and the Peter Lyons had a big smile on his face. He said “It would be a great shame if I were not asked not to make the weapons for the film as I did so many for The Lord of the Rings, but I am going back to Weta Workshop next year to work on a project, join the dotted lines…!” After he finished we got to hold the original ‘Sting’ used by Elijah Wood in the films, taken out of it’s glass case just for us, it was beautiful and very heavy, my wife touched the blade and got told off for nearly cutting herself!